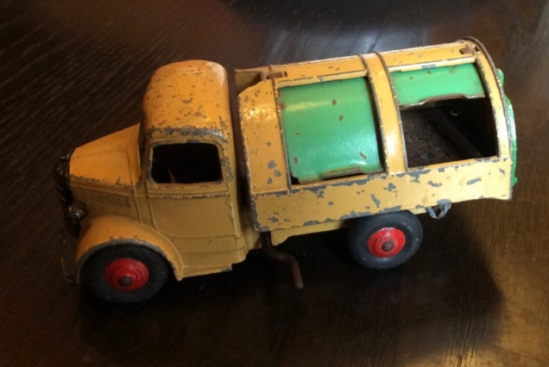 For my sixth birthday, in 1954, I received (perhaps I chose) a toy garbage truck, what I would call a “dustbin lorry,” my very first Dinky toy. At the time my family lived in the Yemen, at Steamer Point, Aden, looking out over the Red Sea and the never-ending convoy of ships arriving to take on fuel and leaving, their tanks and bunkers full as they headed for the Suez Canal or the Indian Ocean. The contrast between a very prosaic, very British, Bedford lorry and the exotic, arid, troubled place in which we lived didn’t strike me at the time, of course, and the little vehicle became just the first of a small collection of cars and trucks destined to collect dust from floors on three continents as my family moved back to the UK and then to Australia. Eventually, of course, the dustbin lorry disappeared, probably worn out and battered by the robust attentions of my myself and my two younger brothers. But I never forgot it. It was perhaps significant that this first delight should be in a utilitarian vehicle, and an unglamorous one at that, rather than a more attractive motor-car from the Dinky range.

In April 2105 I spotted a scarred but complete example of the same model dustbin lorry in an antiques centre in York, and I bought it. I had been looking for this for a while, not obsessively, but whenever I came across a sales display of old die-cast vehicles. I could probably have bought one, perhaps cheaper, online, but somehow discovering one in a shop seemed to me to be more “authentic” (whatever that means); it was certainly more satisfying.

The lorry has two curved sliding upper panels through which, in its full-scale original, the contents of dustbins would be tipped into its bed, and a swinging rear flap. Turning a small handle raises the truck bed, allowing the contents to slide out through the flap. As I waited for my credit card to be approved I closed and opened the panels and felt, re-experienced, revisited, a sensation that I hadn’t registered for…how long…50 years…longer? My memory of handling the toy as a child had survived, but now I had added, or reconnected, a physical dimension to it – metal sliding against metal, the weight of the lorry, its chipped paint rough against my fingertips. Why was this connection important enough for me to pay to repeat it? It hasn’t changed my memory of playing with the original on the concrete in front the tree-shaded bungalow at Steamer Point, a place not seen since and now caught up once again in conflict. 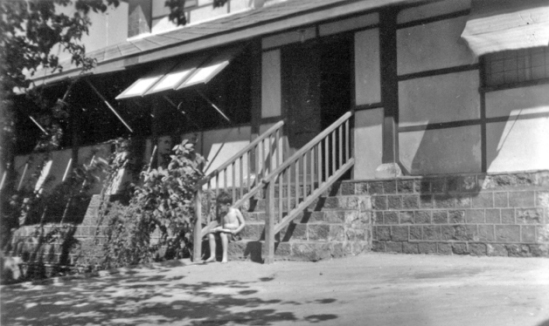 It seems to me that the dustbin lorry is a memory materialised. It has provided me with a step-change in power, power over my own memories, an increase in what I might call the “voltage” of those memories, a transformation. It seems that for me at least, this miniature vehicle acts as both a facilitator of memory and as a transformer.