Back in 1921, the year my father was born, when “Piltdown Man” still provided the “missing link”  between apes and humans, the women of the “Old Stone Age” knew their place. The other day I picked up a fine second-hand copy of Everyday Life in the Old Stone Age by Marjorie and C.H.B. Quennell. In the Quennell’s imagination, while their hirsute mates brought home the bacon or busied themselves painting the cave walls, women merely lurked or cowered, rather glumly, crawled over by demanding infants, in the background, or crouched over the fire. OK, some women made fire, roasted a chunk of meat or did a little scratching with a digging stick, but otherwise females played very much a supporting role. In the book’s illustrations, men did all the hunting and fishing, the flint knapping and the spear-making. Hmm. 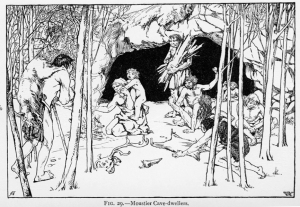 A working Aurignac man arrives home in time for his supper. 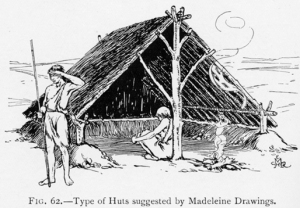 Life in a Madelaine hut seemed to be dispiriting, but the man was looking for better things.

I haven’t read much of the text, but I liked that Piltdown Man (despite the fact that he never existed) was more “presentable” than “his Java ancestor” with a “respectable forehead” and also was right-handed, which made him “seem much more intimate.” The Quenelles were very proud of Eoanthropus, because he was “the first known Englishman.” Ho hum! 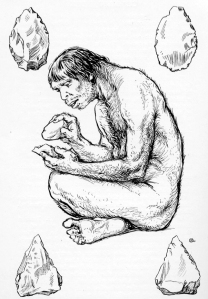