Today the sun was out and the barometer in the hall was pointing towards “fair” and I was at the unglamorous far end of the garden, digging in a bin-full of compost ready for this year’s courgettes and excavating a small trench in order to re-lay an electricity supply to the garage. Being an archaeologist I of course keep a close watch on every spade- and shovel-full of soil. After coming across a couple of fragments of clay pipe stem, I dug up a plastic infantry soldier, of the free-in-cornflakes-packets kind, which appears to have been chewed by a dog. But as the day ended, I found what at first appeared to be a coin, but in fact was a token: 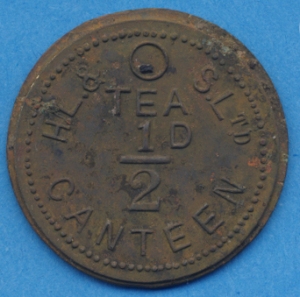 It’s a canteen token, worth a halfpenny, presumably to be exchanged for a cup of tea (but it’s worth considering that in these parts, “tea” also applies to an evening meal, the midday meal being called “dinner”). It is difficult to date the token without finding who H.L.&S. Ltd were, though after the second world war tokens were often plastic. The cost of a cuppa seems modest, and one could certainly buy a cup of tea for a halfpenny in the late C19th, but the price may have been subsidised, so the token could date from pretty-well anywhere in the first half of the C20th. I was pointed, by a Twitter follower, to an example for sale on eBay, which has a hole drilled in the circle above the word “TEA”.

If I find out who H.L.& S Ltd were I’ll update this entry!